The Studienstiftung für Buddhismus (initially "Studienstiftung für Tibetischen Buddhismus") was established in 1987 by the Hamburg businesswoman Gabriele Küstermann and approved as a foundation with legal capacity by the Free and Hanseatic City of Hamburg on 2 August 1988. 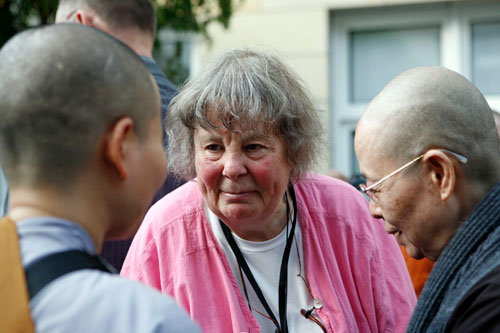 Gabriele Küstermann was born in Guatemala in 1935 to German parents. She earned her living in the green coffee trade of the family business. In 1985 she met Geshe Thubten Ngawang from the Tibetan Centre in Hamburg and completed the first course of the seven-year "Systematic Study of Buddhism" there. She was on the board of the Tibetan Centre for many years and at times also a board member and representative of the women's association Sakyadhita International. She supported Sakyadhita International since its foundation in 1987 and was also very committed to Sakyadhita Sri Lanka and the ordination of Sinhala, Tibetan and German women. She is a co-initiator of the network of Buddhist women in Europe and its website.

The establishment of the foundation arose from her wish to support the tasks of the registered charity Tibetisches Zentrum e.V., which was founded in Hamburg in 1977 under the patronage of H.H. the 14th Dalai Lama, on the one hand with a focus and on a long-term basis in the field of teaching Buddhist principles through qualified translations into German. On the other hand, there was the desire to support the establishment of the Bhiksuni Order (order of fully ordained Buddhist nuns) in Germany as well as the continuation of the orders of monks and nuns in the Tibetan tradition. The establishment of the foundation was also to be an expression of gratitude to Geshe Thubten Ngawang (1932-2003), who laid the foundation's foundation through his kind example, his knowledge and his teaching activities.

The Tibetan Centre is now pursuing its goals on its own, so that the Foundation can now devote itself to the foundation's purposes as laid down in its statutes, in a way that transcends tradition. This was made clear to the outside world in 2005 when the Foundation was renamed the "Studienstiftung für Buddhismus".

In April 2015, at the age of 80, Mrs. Küstermann retired from the active work of the Board of the Studienstiftung für Buddhismus. She now lives in Berlin.